A new type of exercises to learn TCP

During the last summer, we brainstormed about new types of exercises that could help students to better understand different networking topics. For these new exercices, we wanted to leverage the INGINIOUS code grading platform that is being developed at UCLouvain. The UDP socket and TCP socket exercises are good examples of the benefits of a flexible code grading platform like INGINIOUS.

Knowing that students gain a detailed understanding of the TCP header by looking at packet traces, Fabien Duchêne suggested to develop exercises where the students are exposed to a packet trace where some fields of some packets are missing or those packets are not displayed in the right order. The idea looked really nice on paper, but it was not yet supported by INGINIOUS. Thanks to funding provided by UCLouvain’s OER Initiative, Maxime Piraux with the help of Luis Tascon Gutierrez developed a nice INGINIOUS plugin to develop this new type of exercises.

This plugin defines a new type of exercise that takes a packet trace as input. It can then display the trace after having blanked some fields that need to be recovered by the students. The plugin can also shuffle the packets and ask the student to reorder them. More than a dozen of such exercises are available on https://inginious.org/course/cnp3 and new ones can be easily created.

As an illustration of these new exercises, let us consider two of them. The first one, asks the students to determine the values of the source and destination ports in the first segment sent to establish a connection.

This exercises uses a simple packet trace containing two packets. This packet trace is analysed by the plugin and represented in a format that mimics Wireshark. The student needs to provide information about the first packet (shown with the warning icon pointed by a red arrow) and has to encode the source and destination ports. 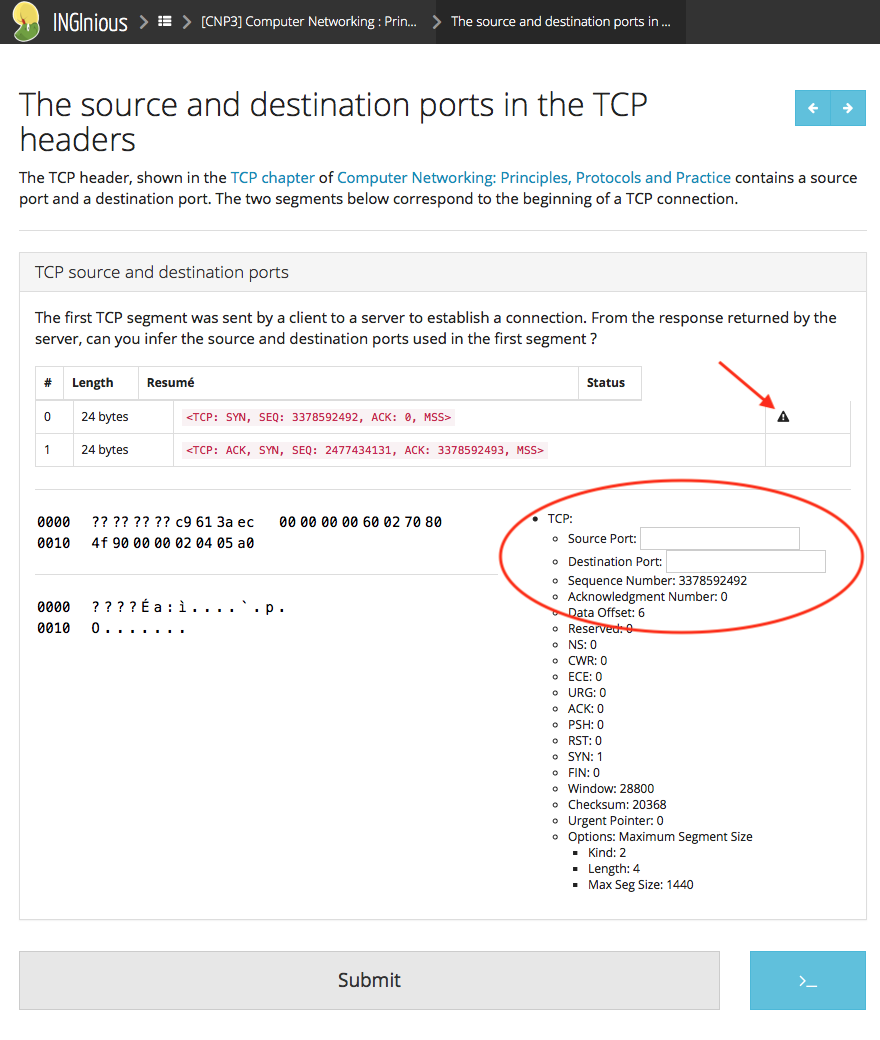 The student can easily answer this question by looking at the second packet of the trace that contains the source and destination ports. 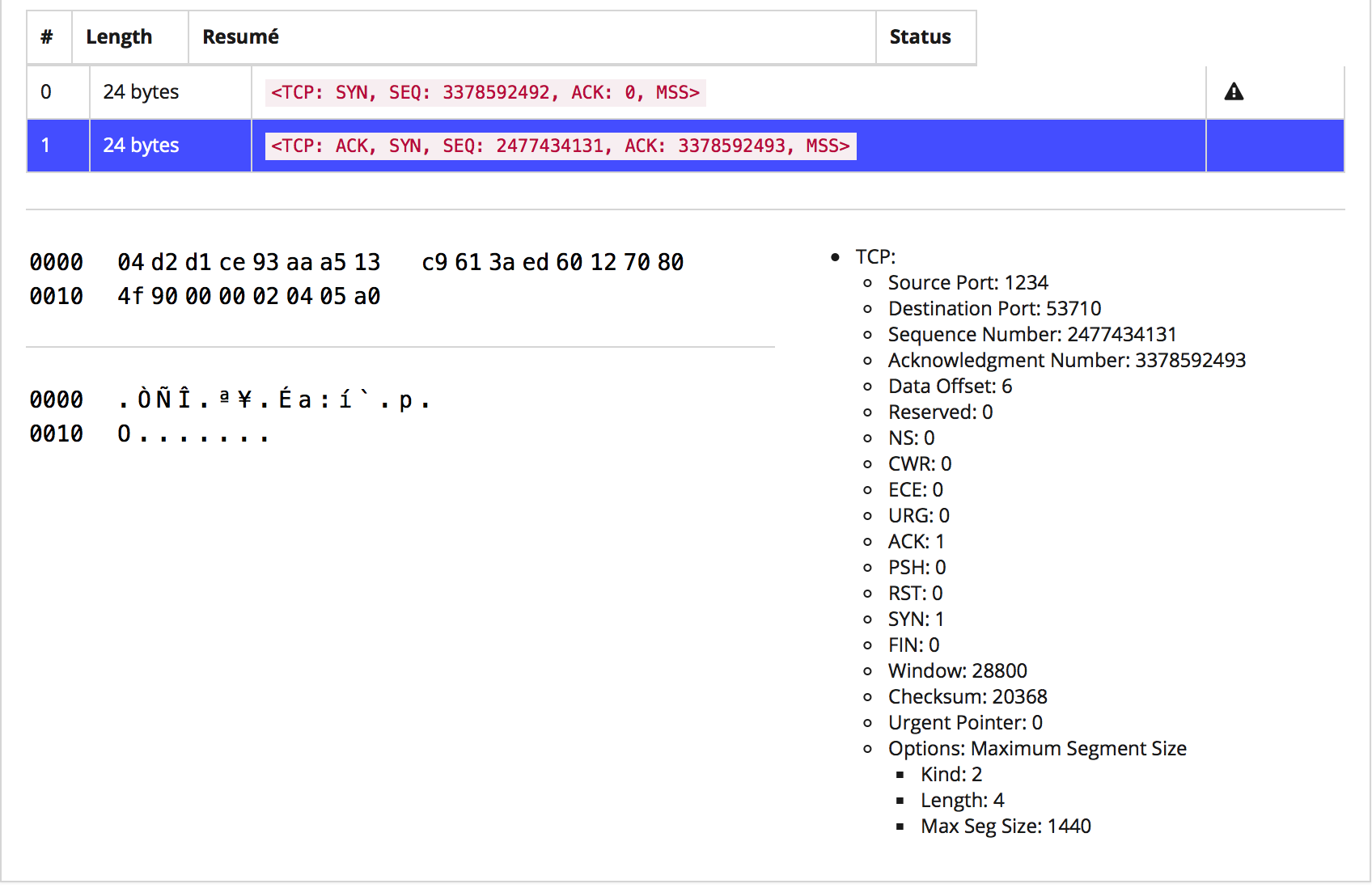 The student then simply needs to encode the missing port numbers. Inginious will check them and provide feedback in case of errors as illustrated below. 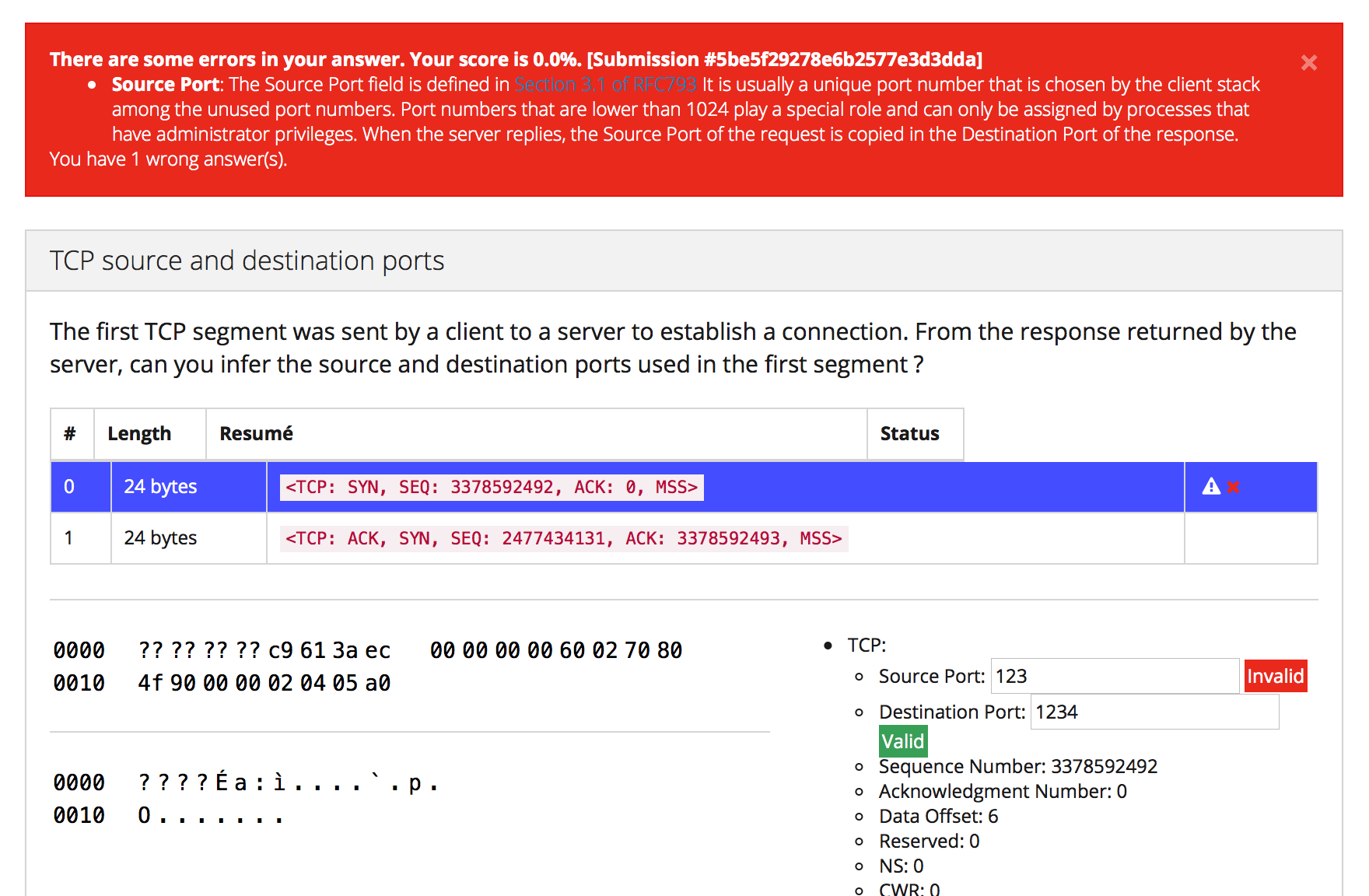 From the teacher’s viewpoint, it is simple to write these new packet exercises. The main difficulty is to collect a packet trace containing packets which can be understood by the students. Inginious provides a simple web interface to encode the exercise. The first step is to define the context of the exercises in restructured text format. 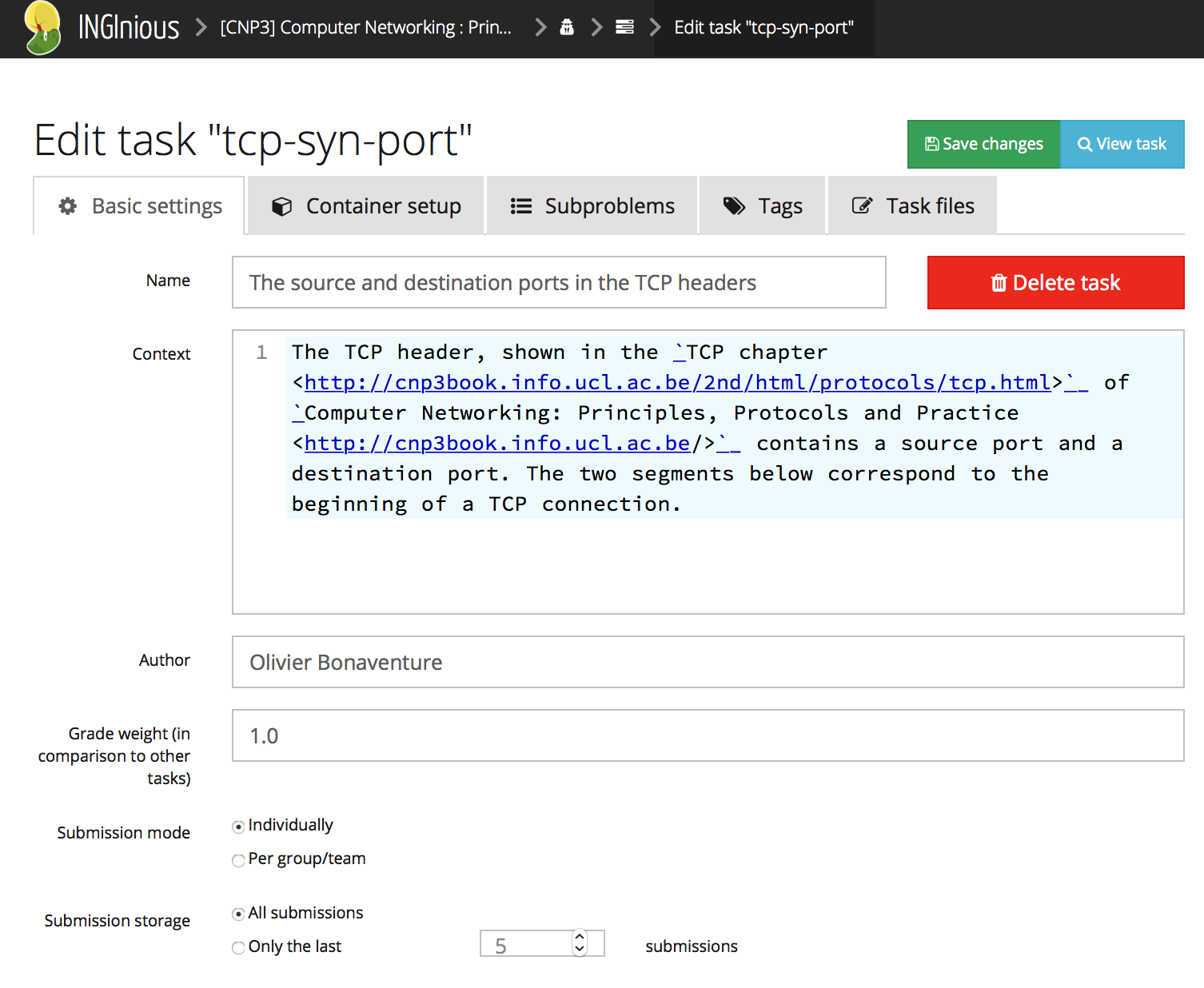 Then, the teacher needs to fill a simple web form. Besides the text of the exercise, the form contains four important fields: 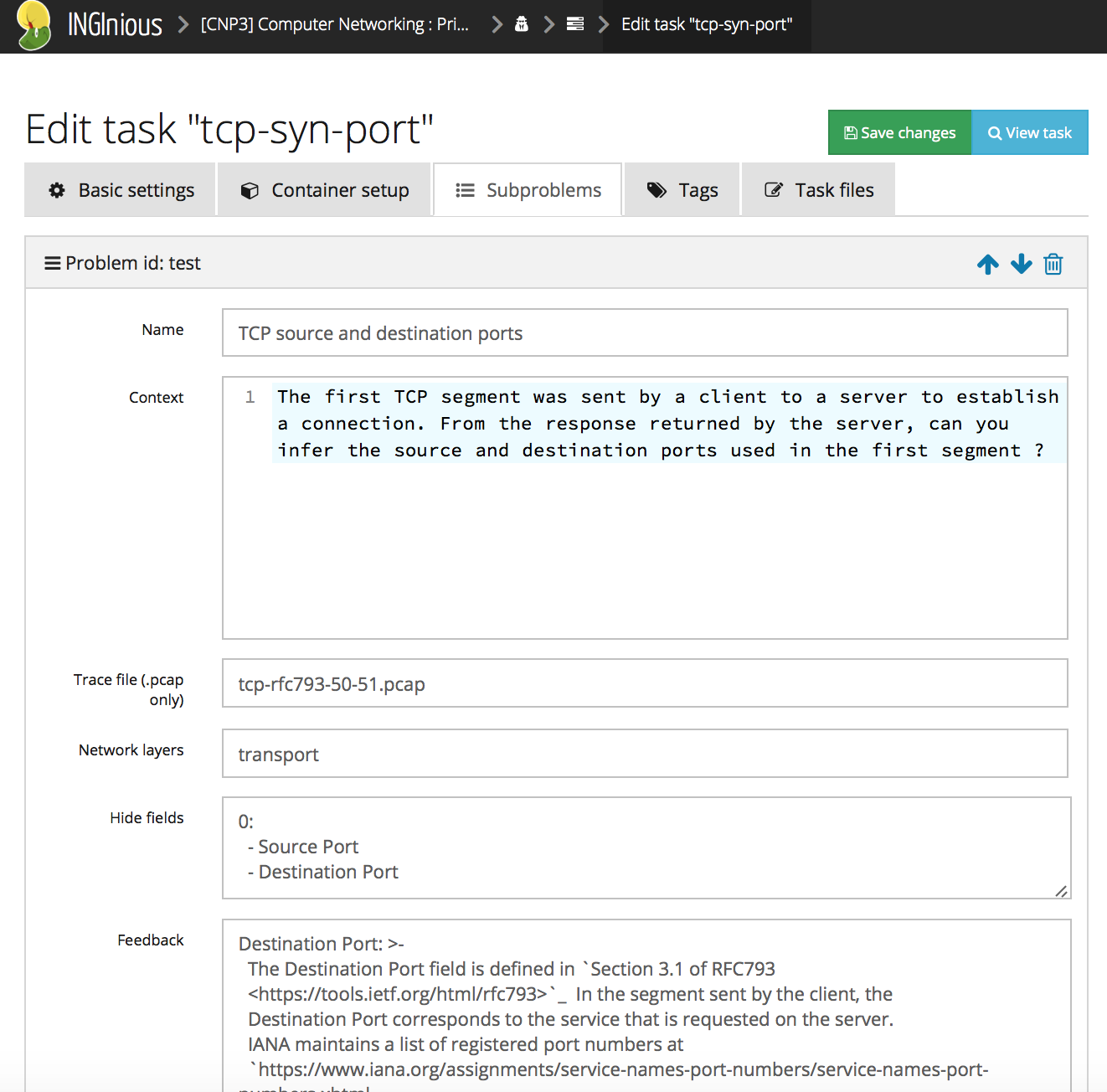 Inginious also allows the teacher to write exercises where the student needs to reorder packets, possibly with some hidden fields. A first example is https://inginious.org/course/cnp3/tcp-reorder-twh where the students have to reorder the TCP segments exchanged during the three-way handshake 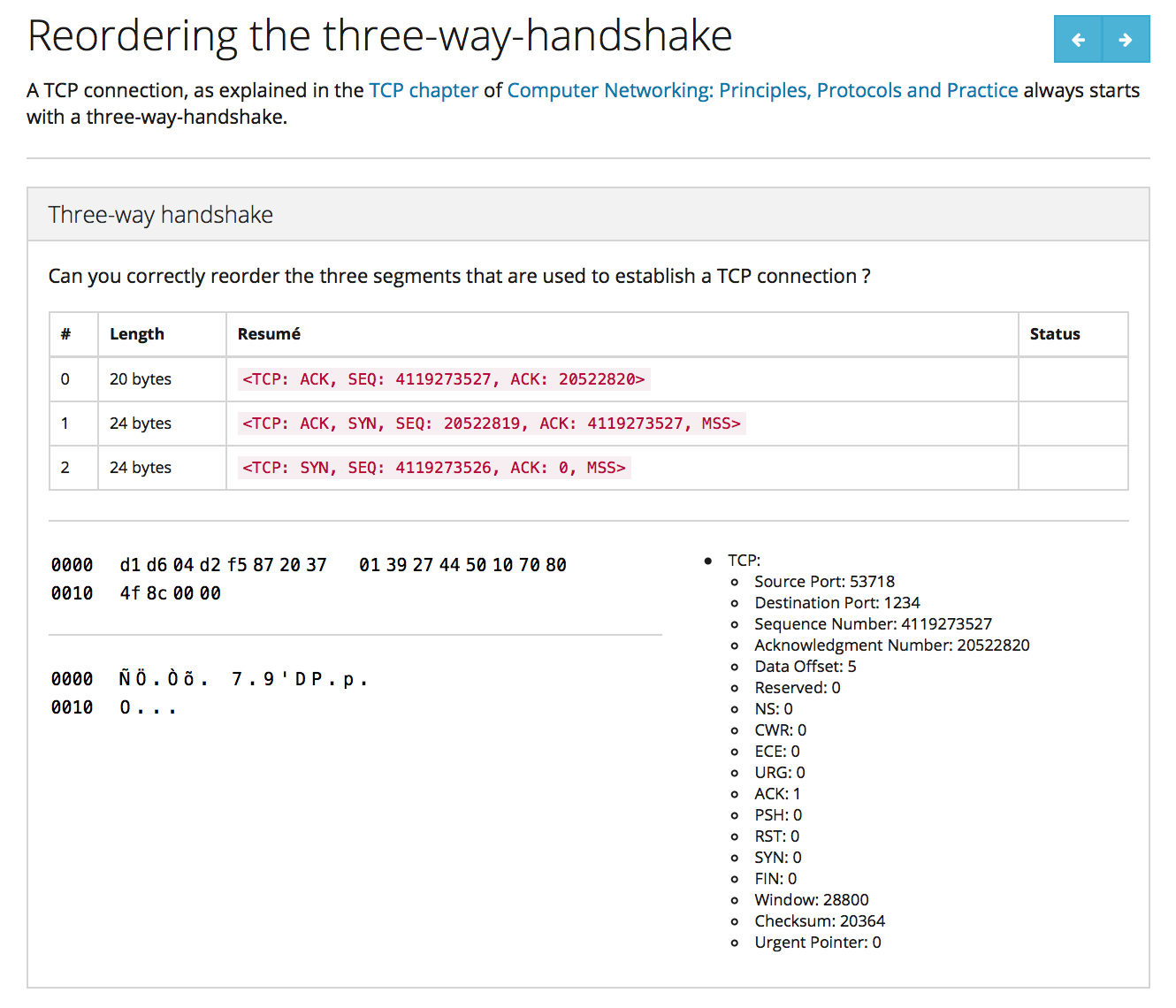