A first analysis of a TCP server

Networking students can learn a lot about Internet protocols by analyzing how they are actually deployed. For several years, Computer Science students at UCLouvain have analyzed different websites within their introductory networking course. This project considers several key Internet protocols, DNS, HTTP, TLS and TCP. In this post, we briefly analyze how TCP is used on some web sites as a starting point for these students.

The simplest way to analyze the TCP configuration of a distant web server is to establish a connection towards this server, e.g. with firefox while collecting all the exchanged packets with wireshark. However, while doing so, it is important to ensure that there are no other applications that exchange packets during the collection of the trace.

As an example, let us look at the packet exchanged between a Mac using Darwin Kernel Version 17.7.0 and http://cnp3book.info.ucl.ac.be. The first packet was sent by the client, it contains the TCP extensions that it proposes to the server. We observe that it includes an MSS size (1440 bytes), the Window Scale option (with a scaling factor of 5) and the Timestamp option defined in RFC1323, the SACK permitted option defined in RFC2018. The No-Operation and the End of Option List options are used as padding to ensure that the extended TCP header spans a multiple of four bytes. 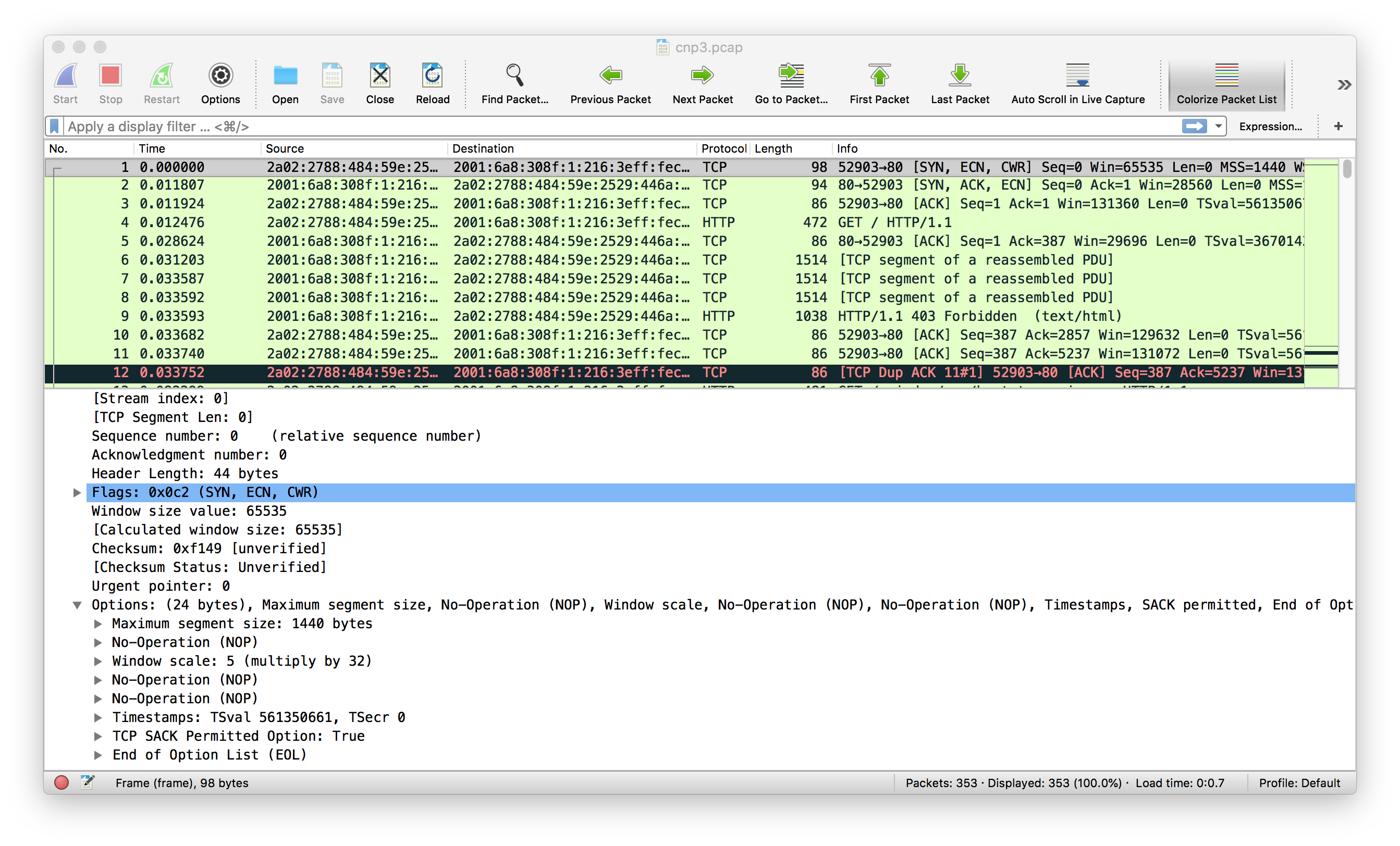 An interesting point about the SYN sent by the client is that the ECN-Echo and the CWR flags are set. This is an indication that the client proposes to use Explicit Congestion Notification defined in RFC3168. The analysis of the server starts with the SYN+ACK that it returns. 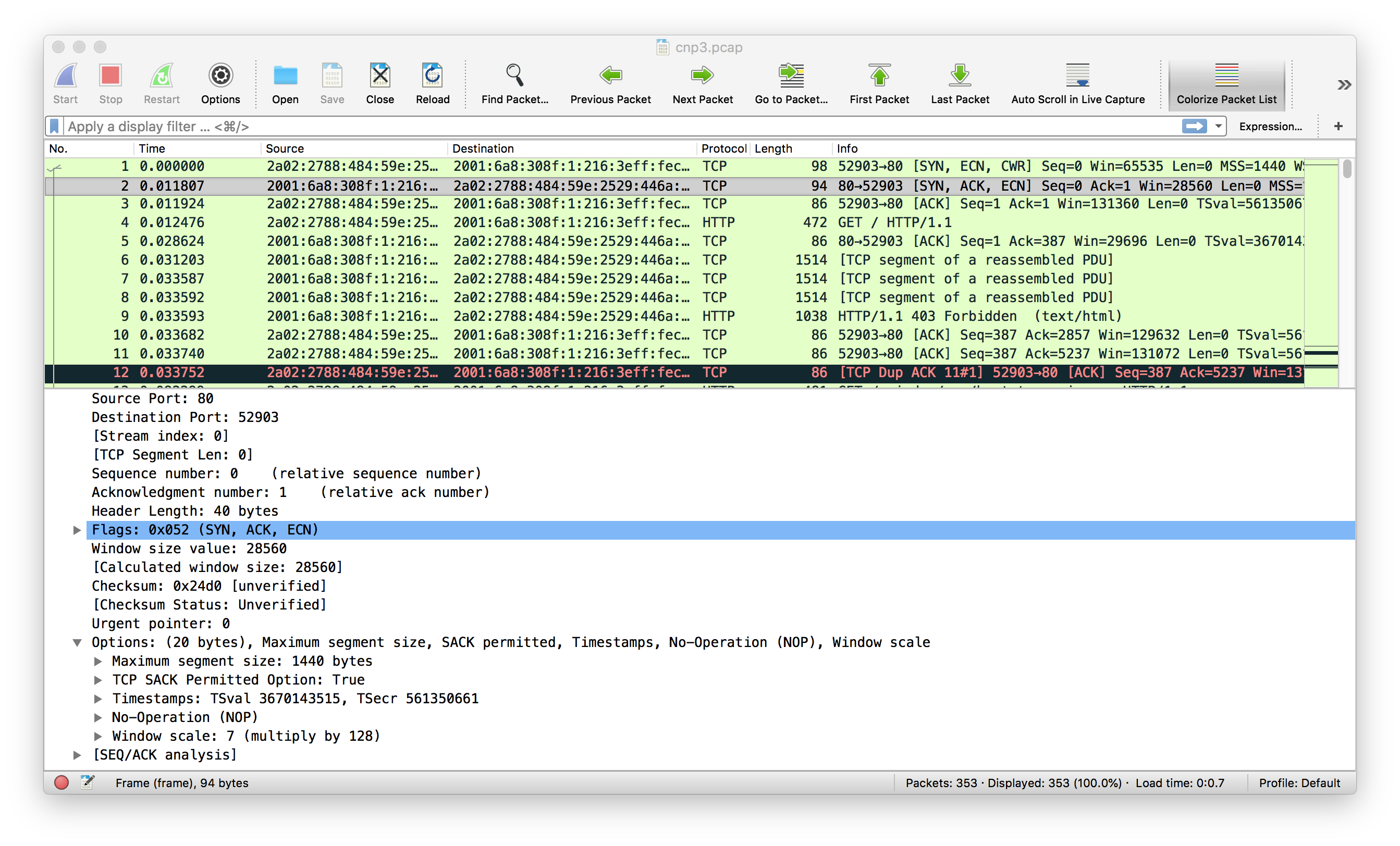 This SYN+ACK indicates that the server is willing to use Explicit Congestion Notification since the ECN Echo bit is set. The server also supports the Timestamp, Window Scale and Selective Acknowledgments options and its MSS has a length of 1440 bytes. It is interesting to note that the Windows Scale factor proposed by the server is larger than the factor proposed by the client.

This wireshark output is only the starting point of the analysis of the TCP configuration because the returned SYN+ACK depends on the options that were sent by the client in its SYN.

Another interesting point is to try to estimate the initial congestion window configured on the server. A naive approach is to find a sufficiently large web object that it available on this server and collect a trace while retrieving it. A simple example is one image such as http://cnp3book.info.ucl.ac.be/exercises/html/_images/cnp3.png. When this large download starts, we observe that the server only sends three segments before waiting for an acknowledgment.

Unfortunately, there are situations where this estimation will not be correct, notably when the server is close to the client. Researchers have proposed a detailed methodology to infer this initial congestion window. Implementing it is outside the scope of a simple course project, but additional results are available on https://iw.netray.io.

Another interesting point to analyze are the TCP extensions that are supported by the server. Besides the extensions that we have already identified, it would be interesting to check whether the server supports newer extensions such as Multipath TCP RFC6824 or TCP Fast Open RFC7413. An interesting tool to carry such an analysis is scapy. scapy provides a set of python methods that allow to easily craft and transmit IP packets that contain TCP segments. It works on Linux, Windows and MacOS and thus should be easy to use.

Since scapy crafts IP packets, it needs to be executed with administrator privileges. The scapy documentation contains a detailed tutorial that describes many advanced features. Here are a few useful ones.

First, scapy can be used to create any type of packet. The simplest example is shown below.

The first line creates an empty IPv6 packet whose header fields have been initialized with default values. Each of the fields shown above can be set when constructing the IPv6 packet. For example, a=IPv6(dst="2001:6a8:308f:1:216:3eff:fec5:c815") creates an IPv6 packet with the specified destination address.

It is also possible to create a TCP segment inside an IPv6 packet as follows:

Again, we can force any value for the fields of the TCP header. An interesting feature of scapy is its ability to send a single IP packet and wait for a response.

In the above example, we send a TCP SYN to 2001:6a8:308f:1:216:3eff:fec5:c815 on port 80 with the MSS option and the TFO option. We received a SYN+ACK, but without the TCP Fast Open option, which indicates that the server does not support this extension.

A similar test towards the IETF web site reveals that it supports this extension:

Unfortunately, the current public version of scapy does not currently support Multipath TCP. It is thus not possible to test whether the remote server supports it.

It is also possible to check whether a server supports Explicit Congestion Notification by setting the ECN Echo and CWR flags in the SYN segment.