The Domain Name System is one of the key protocols in today’s Internet as it allows to map names onto IP addresses. Most networking students probably see DNS as the typical request-response application running over UDP. To retrieve the DNS record corresponding to a given name, a client sends a DNS request to its resolver inside a single UDP packet. DNS was defined in RFC1035. Over the years, the protocol has evolved have several extensions have been added. Several IETF working groups have been targeted around the Domain Name System:

There are several ways to track the evolution of a protocol such as the DNS. IETF participants would subscribe to the working group mailing lists and read the recent IETF drafts. However, tracking these mailing lists can consume a lot of time. Another approach is to way until DNS extensions are supported by clients and servers and capture the packets that they exchange. Johannes Weber has recently posted packet captures of several recent DNS extensions on his blog: https://blog.webernetz.net/dns-capture-udp-tcp-ip-fragmentation-edns-ecs-cookie/. This can be a good starting point if you want to explore DNS, DNS over TCP, EDNS extensions such as the client subnet RFC7871 or DNS cookies RFC7873 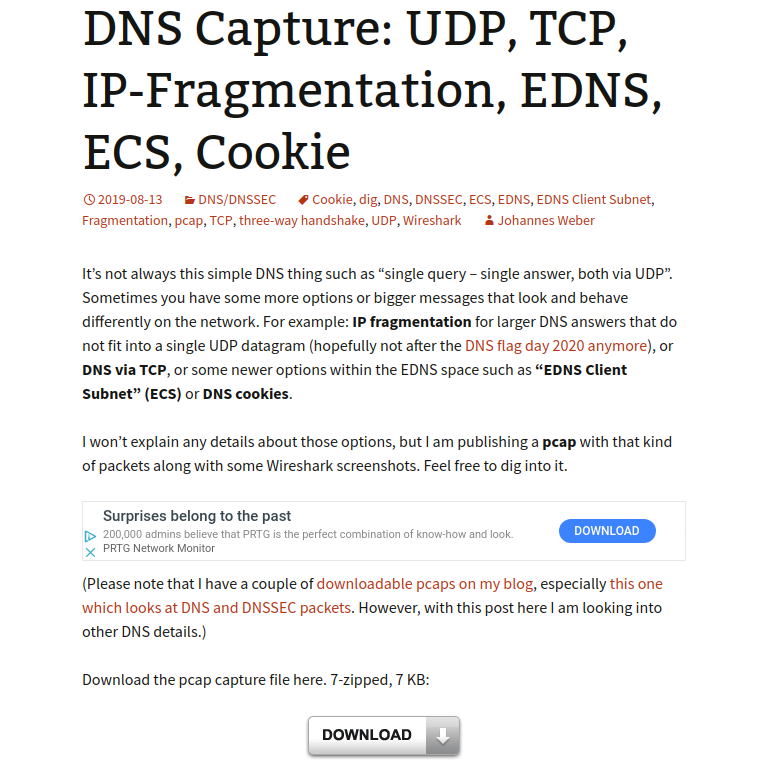 This blog post was written to inform the readers of Computer Networking : Principles, Protocols and Practice about the evolution of the field. You can subscribe to the Atom feed for this blog at https://obonaventure.github.io/cnp3blog/feed.xml. These notes are also posted on the ebook’s Facebook page